Arthropods are invertebrate animals having an exoskeleton (external skeleton) made of α-chitin and/or calcium carbonate, a segmented body, and jointed appendages (arthropod means “jointed limb”). Arthropods include the insects, spiders and scorpions, millipedes and centipedes, and crustaceans. The arthropod body plan consists of segments, each with a pair of appendages. The rigid exoskeleton inhibits growth, so arthropods replace it periodically by moulting. They have over a million described species, making up more than 80% of all described living animal species.

Distribution: WA to NSW and around Tasmania

Rock lobsters differ from true lobsters by lacking pincers on the first pair of walking legs. The pleopods (under the tail or abdomen) are reduced in size and used for carrying eggs rather than for swimming. The carapace (shell on the head region) is orange-red in colour in shallow water, whilst deep water individuals can be reddish-purple or lighter in colour. The South Australian and Tasmanian fishing industry for southern rock lobster catches approximately 5000 tonnes per year. The Southern Rock Lobster is distinguished from other rock lobster species by two long spines (horns) projecting forward from the front of the carapace beside the eyes. 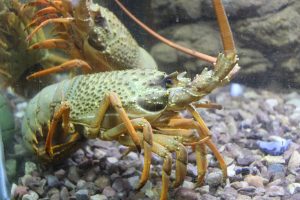 Habitat and range: Rocky reef from 20m to 100m depth in caves and crevices.  NSW to Eastern Tasmania and New Zealand.

Body is greenish and legs red-brown. 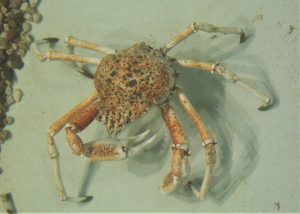 Large crab – carapace 165 mm long and up to 700 mm across the legs.  Common in shallow water but also found at 820m depth, from NSW around to WA.  Sometimes found in large swarms, probably to moult and mate.

Found in low intertidal reefs as well as up to 180m depth. Sticks seaweed on its body as camouflage. From NSW to WA. 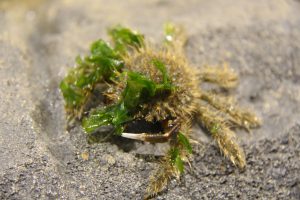 The hairs are used to hook on algae as camouflage. Common in rock pools, NSW. Vic, Tas and NZ.

Distribution: around Tasmania and from WA to NSW

Comments: Similar in body shape to true lobsters, however the abdomen of squat lobsters is tucked up beneath their body body length to 3 cm. This species is small, reddish brown in colour and has long claws.  It is commonly found living among broken shells and other course sediments. 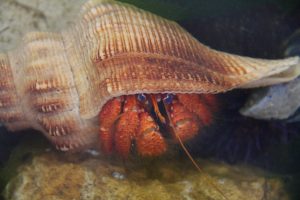 The largest hermit crab in Tasmania. Has washboard-like ridges along the inside of the claws that can be rubbed together to make a scrapping sound. Found between 3 to 130 m deep from SA, WA, NSW, western Vic and Tas.