Cnidarians are a diverse group of aquatic animals of over 9,000 species such as hydras, sea fans, jellyfishes, sea anemones, and corals. Cnidarians all have some type of specialized stinging cell organelle. Widespread in marine habitats and less common in fresh water. Cnidarians’ bodies typically take one of two forms: the polyp or the medusa. The polyp form is adapted for a sedentary or sessile lifestyle (attached to a surface), while the medusa form is adapted for floating or free-swimming. Sea anemones and corals are all polyps. True jellyfishes are all medusae, though some have a polyp larval stage. 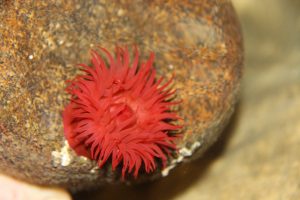 Found on rocky shores, mid intertidal zone to 5 m depth, from WA to Qld and around Tasmania, also New Zealand. Diameter to 4 cm. Eats drifting food particles, small invertebrates. Generally seen at low tide in its contracted shape, appearing as a dark red blob. At high tide, it spreads its tentacles to feed. Young waratah anemones emerge as fully formed replicas through the mouth of the adult.

Red, or Bubble, or Southern Anemone 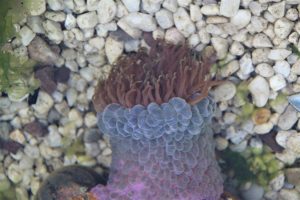 Found on exposed reefs, 1 – 35 m depth, from SA to NSW and around Tasmania.

Distribution:  found around Tasmania and from southwest WA to northern NSW

Comments:  During the day this species withdraws its tentacles giving it the appearance similar of a sack of baked beans.  At night the anemone moves either by crawling or drifting on the current in order to catch floating prey.  Can grow up to 150mm in diameter.

Distribution: around Tas and from SA to NSW

Comments:  Sea whips are colonial animals made up of many polyps, or small individuals, which grow around the central stem.  Sea whips are related to soft corals, and belong to the same phylum as anemones and jellies (Cnidaria).  This species is the most common sea whip found on deep reefs in SE Australian waters.  It is not uncommon to see other filter feeding invertebrates such as anemones and basket stars perched on sea whips to escape the low current flow and hence low plankton supply near the sea bed.