Echinodermata contains about 7000 living species, all exclusively marine with no fresh water or land based (terrestrial) species. Adult echinoderms possess pentaradial symmetry (five-sided) a calcite skeleton and  a water vascular system consisting of a network of fluid-filled canals that function in gas exchange, feeding, sensory reception and locomotion.

Found on moderately exposed reefs from WA to NSW and around Tasmania, also New Zealand. Eats small organic particles, feeds at night. While sea cucumbers can eject their internal organs in response to a predator, the Brown sea cucumber tends not to do this. Sold as food in Asian markets under the name bêche-de-mer in French, trepang in Indonesian, or namako in Japanese.

This species of sea urchin has short spines, and can often be found wrapped amongst the fronds of seaweeds. Found around Tas and from SA to Vic. 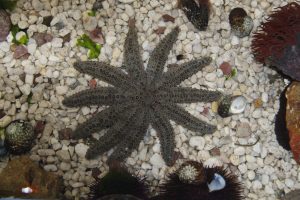 Common in shallow water and reefs, usually 11 arms but may have 7 to 12. Arms can regenerate if lost. Predates on bivalve molluscs.

Eats large algae, found from WA to Qld and around Tasmania.

Eight armed, or Cushion, or Spurred, or Carpet Sea star 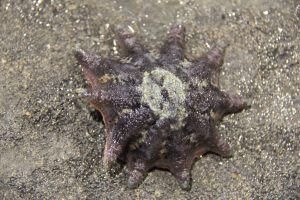 Abundant in rock pools, feeds on algae and detritus, molluscs and scavenges. Most have 8 arms, some have 7, 9 or 10.

Common in rock pools or under stones, often under seaweed Neptune’s Necklace. Feeds on algae on rocks.

The main difference between this and T. magnifica is that this species has only six large plates along each of the body margins. This species feeds mainly on sea squirts, sponges, bryozoans and algae. 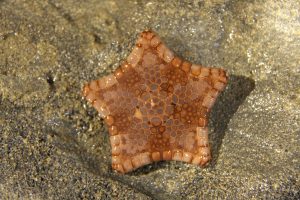